REPLY & QUOTE
BlackWidow (Torsten Rossmann) said
Just a small update for now. I have painted the rubbers of the 2. track .... 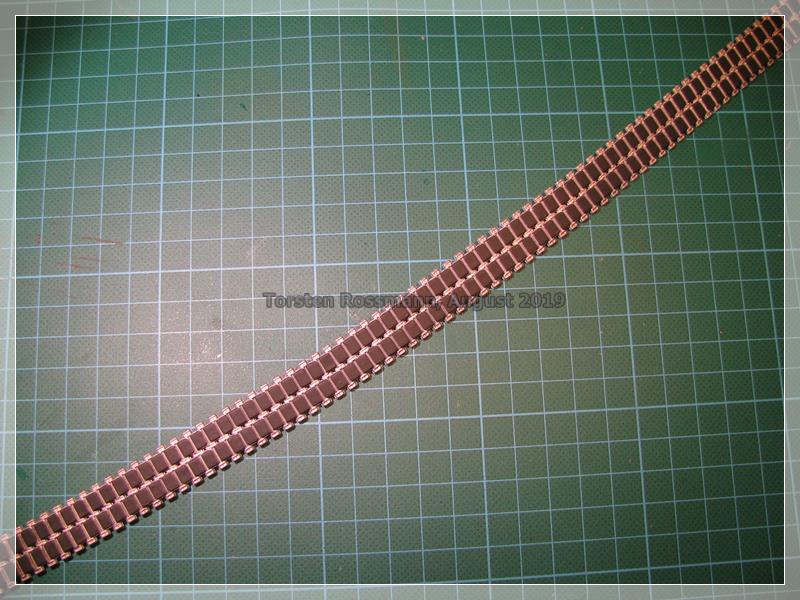 .... Cyanoacrylate on both ends and clamps for a few minutes to fix it .... 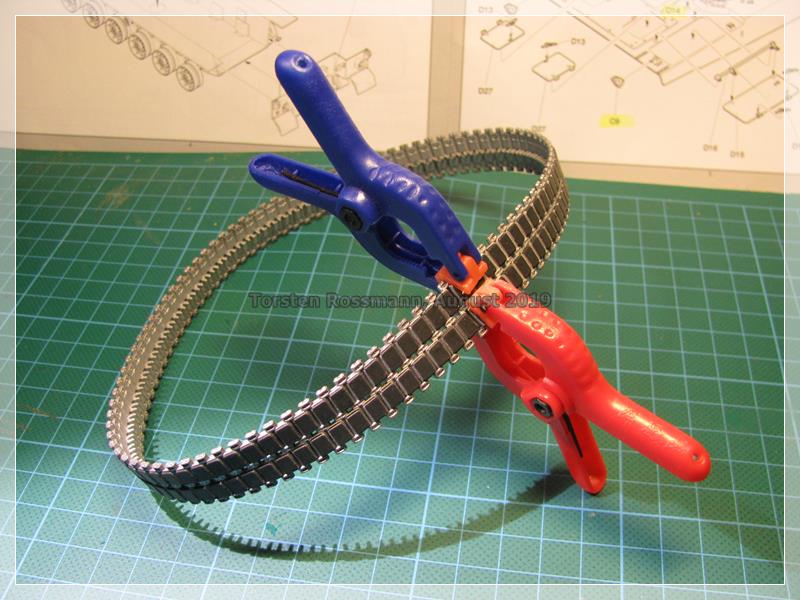 .... attaching the track to the right side was a lot easier than to the left side. Okay this was my 2. attempt

Looks a lot better than on the other side .... 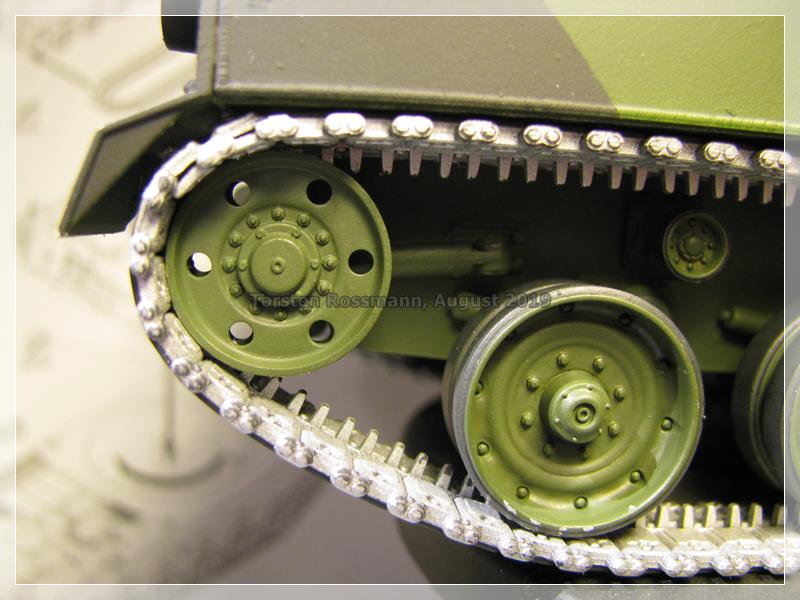 .... but as you can see I still have to do some touch ups here and there. I'm already a bit further than this step. Most small parts are attached to the build, but I haven't taken any more pictures of that so far. Will do in the next days. Next update follows in a few days. So stay tuned ....

REPLY & QUOTE
BlackWidow (Torsten Rossmann) said
As promised on Wednesday here are some photos of my nearly fin(n)ished Moukari .... 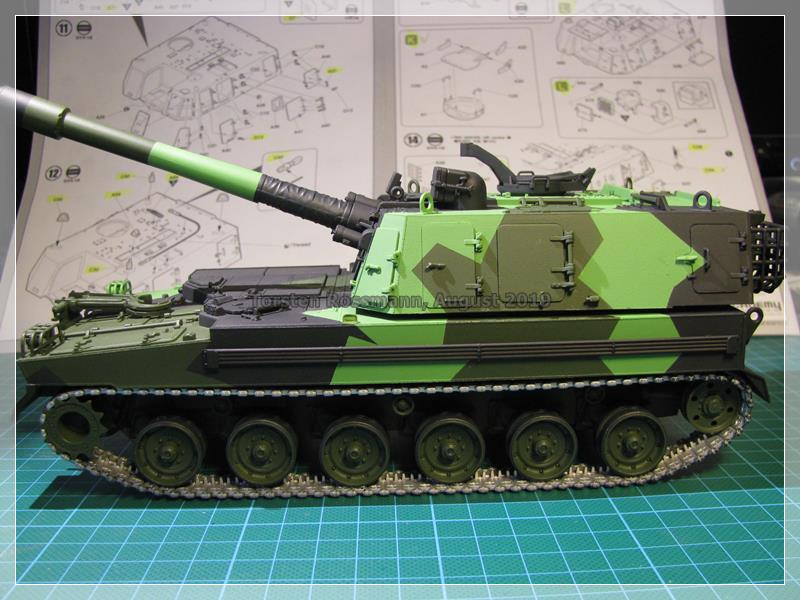 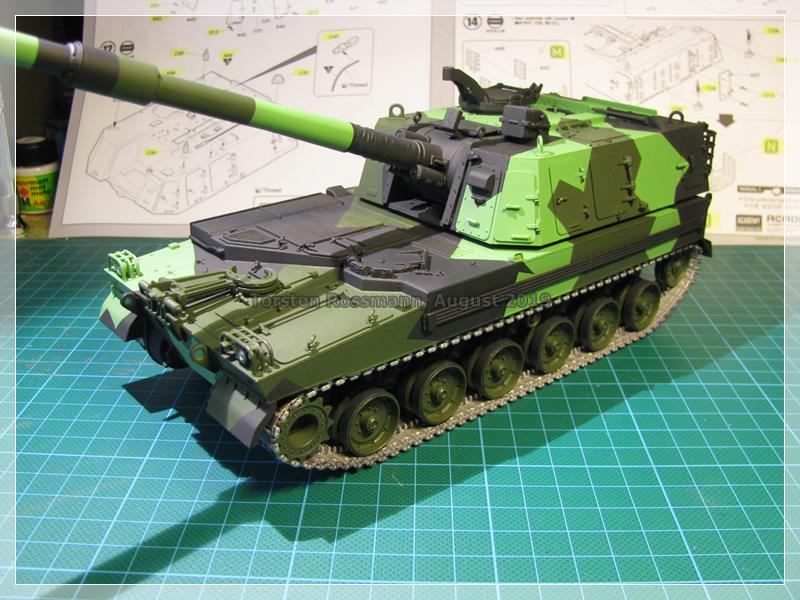 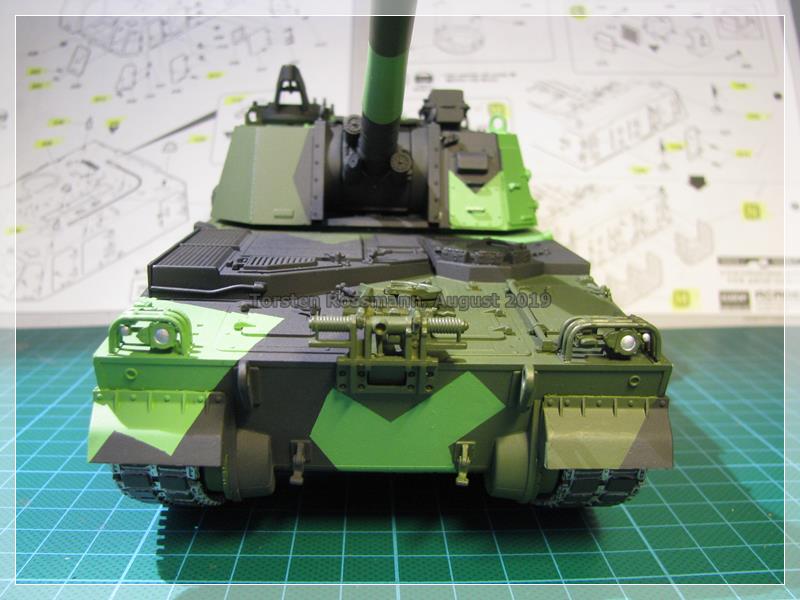 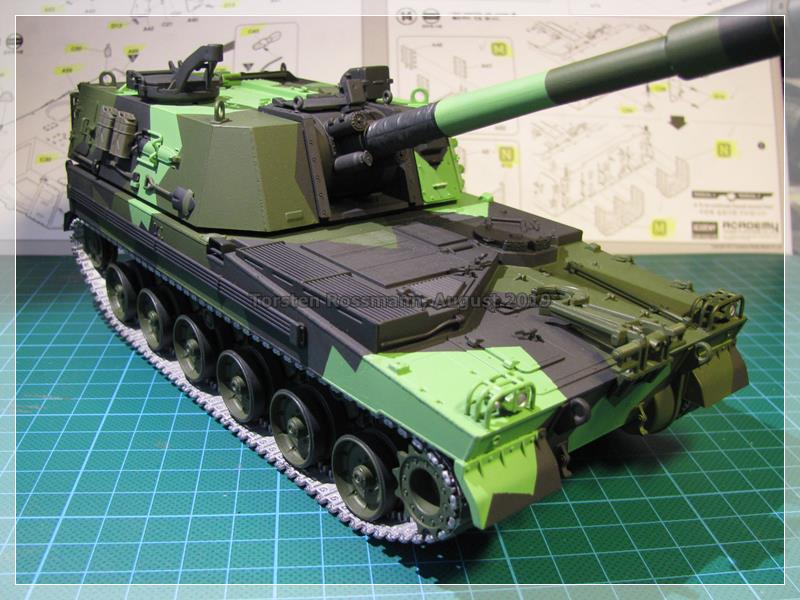 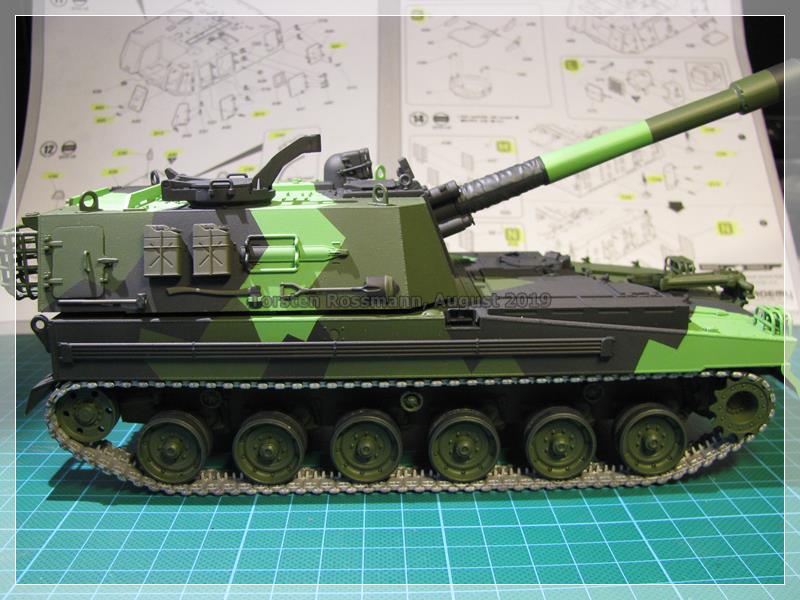 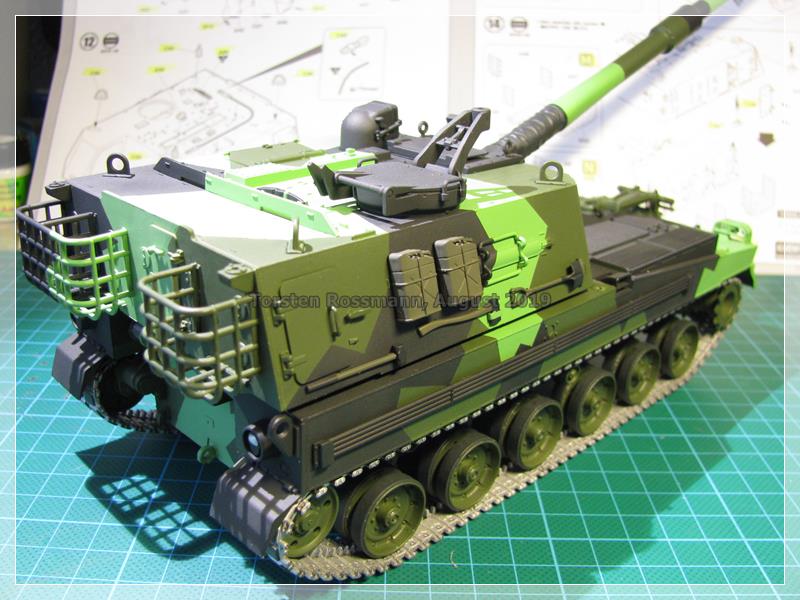 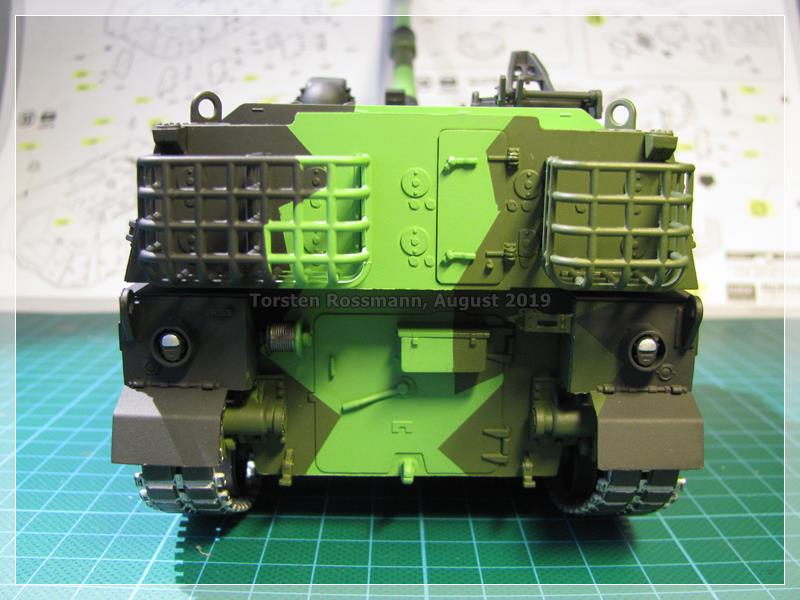 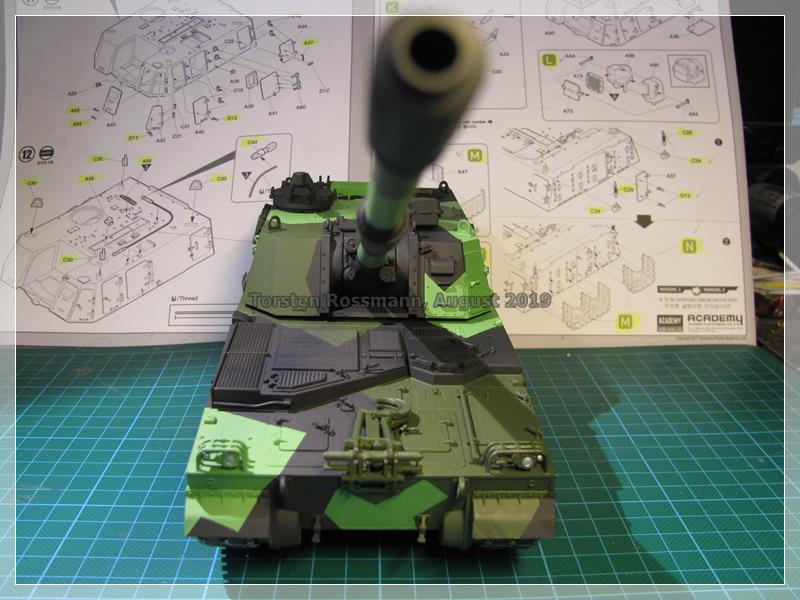 .... all small parts, except the rear view mirrors, are now attached to the K9. I will leave the towing cable aside as long as I have found something better than a thread. Also I won't glue the gun to the turrett because of transport reasons. Still have to do some minor paint corrections on the tracks. I have noticed that Revell Aqua Paints don't adhere as well on these vinyl tracks as on the vinyl tracks of the Revell kits. Must be some different material.
So on the weekend I will spray Erdal Bodenglänzer all over the kit and afterwards I'll add the few decals. Hopefully everything is done by the end of next week after 4 months working on this beauty. Okay, I have built also 2 aircraft in that time ....

REPLY & QUOTE
BlackWidow (Torsten Rossmann) said
With the photos 100 + 101 I bring this build to an end. Just went though the thread again and noticed, that I started this build already in March, so it's 5 months now with some interruptions. Never needed more time for a kit to build.

So, I call this beauty fin(n)ished just right before my summer holidays and ready for the upcoming model shows in autumn. Here are just 2 more quick shots .... 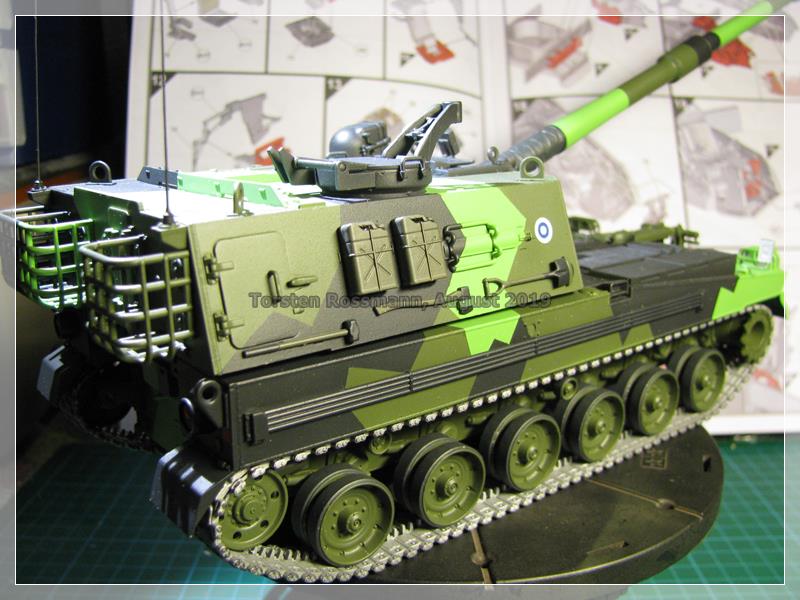 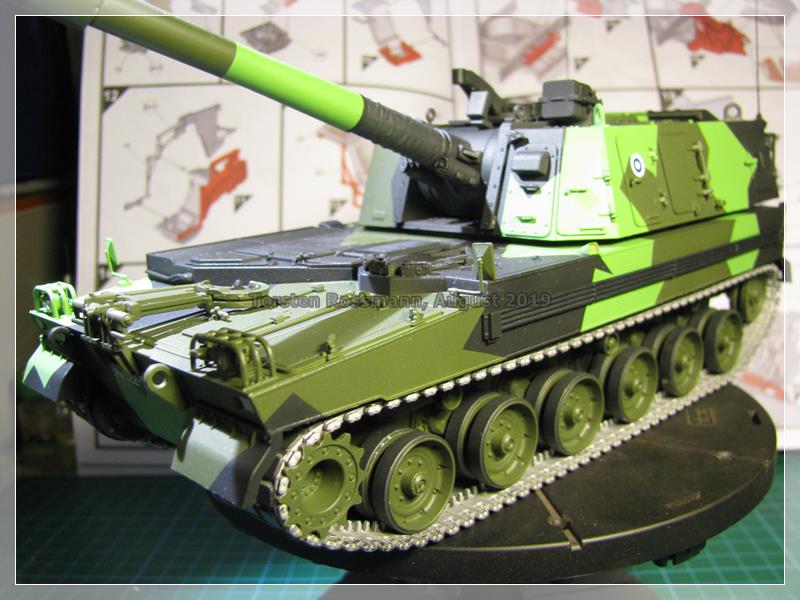 First of all I want to thank everyone here who has supported me with his comments along the way. A special thanks goes out to Andreas, who sent me some great photos of the K9, which stood at the Tank Museum Parolanummi in the summer of 2017. These photos were invaluable worthy for me for painting the camo lines. Thank you very much, Andreas! Another thanks goes to Olivier, whose build and build report of his K9 solved some problems in detailing for me. Thank you very much, Olivier!

) ,the rear view mirrors and painted rear and front lamps. I finally decided to use the "Version B" decals for vehicle Ps 522-29, which was that K9 in Parolanummi. The antennas I used come from Modellbau Schatton and are Bundeswehr antennas and not the finnish ones. I don't mind that because they look great and are far better than the kit ones. I've also added a small finnish flag to one antenna, but it's not visible in these photos. The fitting of this kit is very good and it's a pleasure to build. The challenge is the camouflage. It needs a lot of time, patience and checking and re-checking photos of the original. But we're all scale model builders, so "to rush" is a word not known to us, isn't it? The only thing I'll try to make better next time is the paint of the tracks. They should look a bit more rusty. But I'll add no dust or other weathering to this build, because the vehicle was new in 2017 and "on show", so it was clean.

Happy modelling and good luck for all your builds!
Torsten

REPLY & QUOTE
BlackWidow (Torsten Rossmann) said
First model show last weekend for my K9 Moukari in Augsburg and what a surprise. My Moukari was not alone there! One of my swiss friends has built the same kit at the same time! Funny, isn't it? I was really surprised, because usually he builds some fine aircraft models in 1/72.
While I built my Moukari how it looked like at the "Day of the Open Door" in Parola 2017, Beat has built it how the finnish K9 look like today after some "modifications". We believe, all K9 of the Maavoimat will look like this in the future.
Here you can see both K9 side by side, Beat's on the left side, mine (a bit cleaner) on the right. 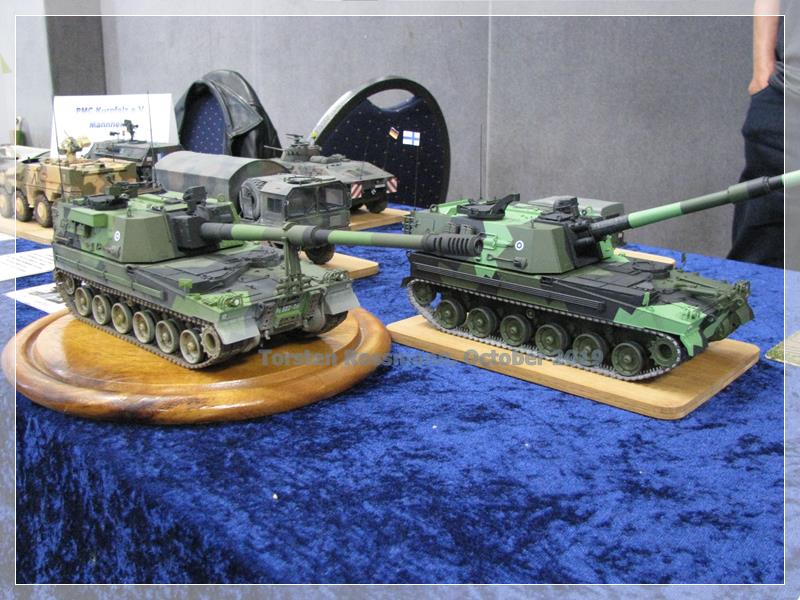 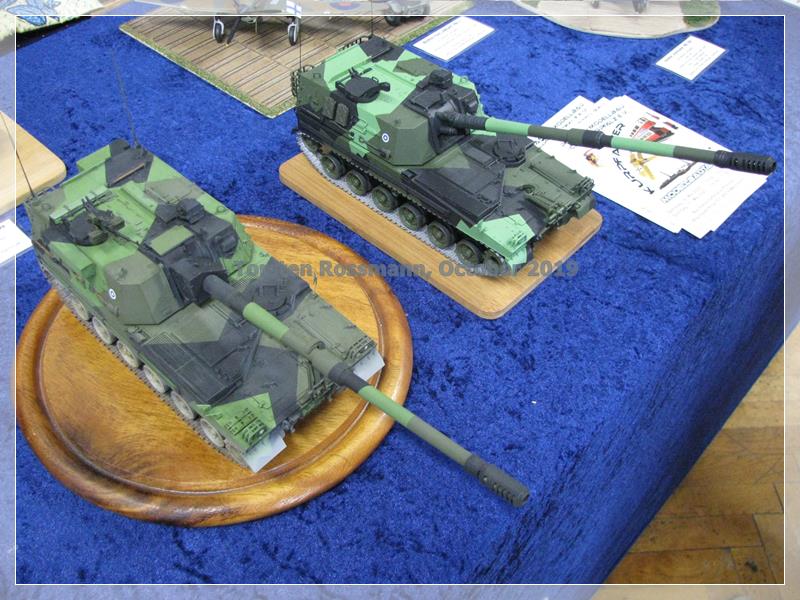 Glad to read my own build has been of some help.