REPLY & QUOTE
Mechworker (Adam Rehorn) said
During the Cold War, nuclear-tipped, rocket-launched weapons were all the rage. From the towering ICBMs that would end the world to the ridiculous and perilously short-ranged Davy Crockett nuclear mortar, it was expected that all phases of future war would be conducted by some kind of rocket bombardment with mushroom clouds as the end result.

A perfect example of one such piece of equipment, and one that falls somewhere between the two aforementioned extremes, was the Honest John. This was a truck launched artillery rocket that could be fielded with both conventional and unconventional warheads. With a range of between 15 and 30 miles, it was basically the equivalent to tube artillery. It was highly mobile and promised to deliver nuclear Armageddon to an advancing enemy army from behind friendly lines.

Of course, it only makes sense that there would be replicas of such a system, since it was important to the US and its allies. However, one of the more interesting reproductions of this weapon is actually a toy! I mean, it was the Cold War, what else were kids going to play with besides battlefield nukes? The toy Im talking about is the Dinky Toys No. 665 Honest John, and it was a particularly long-lived model in the Dinky line!

Check out this diecast doomsday weapon at the link below! Sure, its not a kit, but its a neat replica and it really fires! (Dont point at eyes or face) 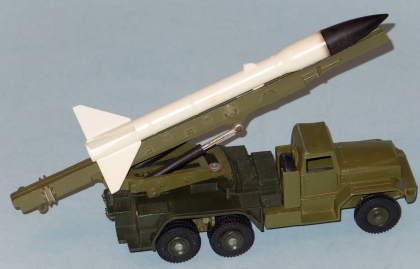 REPLY & QUOTE
Biggles2 said
Looks like Dinky's quality really declined between the time of the Honest John, and earlier releases such as Centurion tank/transporter,ambulance, Austin Champ jeep, 25ld'er/Quad combo, 5.5" gun, and many others from 50's to early 60's - all metal then, and NO plastic! I had the Revell 1/40 Honest John and Dinky's doesn't look anything like it!

REPLY & QUOTE
Mechworker (Adam Rehorn) said
Yeah, compared to the other Dinkys I have, which are all '60s or earlier, this one is a bit different. However, while the plastic looks jarring, the rest of the truck is just as good as the other Dinkys. The metal's heavy and it still feels mighty solid and well-made.

I don't think it's fair to say it's cheap or low-rent or anything. There are plastic bits on a number of other Dinky Military stuff, including the missiles.

As for it looking different, is the one you have one with the big A-Frame support arms? There seem to be two different types of launcher - maybe someone here can tell us which is which? I've seen a bunch of pics online of ones that look just like the Dinky, albeit with the top down!